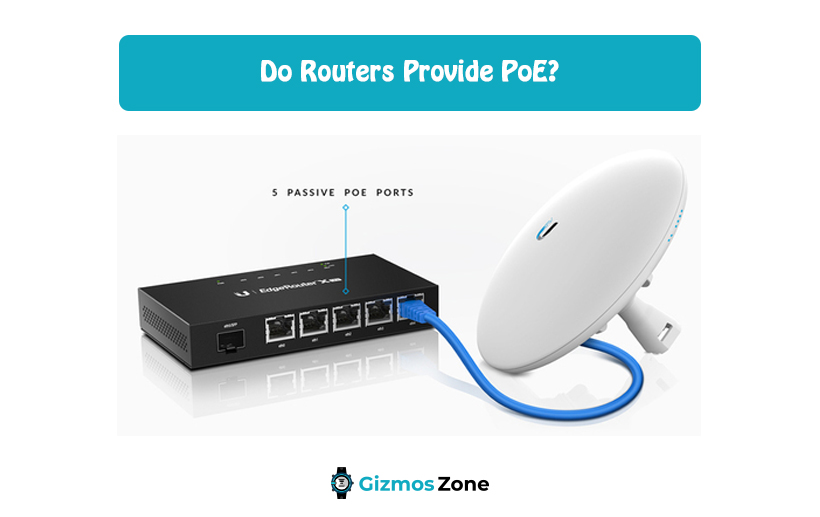 Oftentimes people wonder whether devices that can be powered over Ethernet can be powered directly from the router. Yes, it’s possible. We have discussed this in detail in this post.

Though, indeed, most routers aren’t advanced enough to deliver power to other devices. But there are a few models that provide Power over Ethernet.

How to know if the router can provide Power Over Ethernet?

You must know that most of the standard routers available in today’s market aren’t equipped to offer Power Over Ethernet. But, if you are willing to check it for extra confirmation, it can be done easily. The easiest way to know whether or not your router is Power Over Ethernet equipped, you must check the specifications of the particular model of router you have bought.

If you have lost the manual or can’t find a manual for that model online, there are other ways of finding out whether the router is Power Over Ethernet compatible. How would you find out otherwise? Look for the Ethernet ports on the router. Usually, they are labelled. Look at the labellings. If the ports can deliver Power Over Ethernet, they would be differently coloured. This feature is again rare. What most people have to do in the end is use a Power Over Ethernet network switch or PoE injector.

What type of modern-day router provides Power Over Ethernet?

If you are looking for routers to provide Power Over Ethernet to devices, it’s worth considering the models by Ubiquiti. They are in great demand and a lot of people have experienced satisfactory services. You can check for the reviews online.

Is a Power Over Ethernet Router Worth buying?

If you have devices in your place that are to be powered over Ethernet, there are other options you can opt for. They are better than buying a Power Over Ethernet router. For instance, you can use your existing router and buy a Power Over Ethernet network switch or a PoE injector and use it to deliver power to your devices. That’s what the majority of users find affordable and convenient.

If you have to power only one device, using a PoE injector is the best option.

So how would this all end up working?

Don’t you know how the PoE injector works does? Well, read below to know the process in detail.

Now, you have to run another cable from the PoE port present on the injector into the single port that’s found on the wireless access point. That cable works as the access point for both data and power that the devices require to function.

Now if you want to derive power from a PoE network switch, the setup would be quite different.

By now you know that usually standard routers aren’t PoE compatible. This also means that though the PoE network switch is equipped to deliver power over Ethernet, it first needs to power itself. Therefore the network switch has to be plugged into a regular power outlet.

In this case, you must connect the single ethernet cable from one of the LAN ports on the router to any of the PoE network switches. This would make all the other ports available to be connected to other devices.

Also, remember that PoE ports aren’t exclusively for those devices that are compatible with PoE. People can connect these ports to any device of their choice. It’s as simple as you would connect devices to any regular network switch.

Do you know what the best part is? The ports on the switch themselves know whether to provide data or power or provide them together. This depends on the device that’s connected to the PoE ports at the other end.

If you had used a PoE switch beforehand, you must know how it works. In some cases, people didn’t find a PoE switch quite useful. Especial if you have a network switch somewhere in your home, it’s useless to get another connection done. Setting up a PoE injector, in that case, would be useful. The injector offers several access points and therefore is a cost-effective solution.

Now if you are doubtful whether to use a PoE network switch or a PoE injector, you have a tough decision to make. But, we can make it a bit easier. Below enlisted are a few questions you ought to ask yourself, before making a decision.