What is The Difference Between the Gigabit Switch and Ethernet Switch? 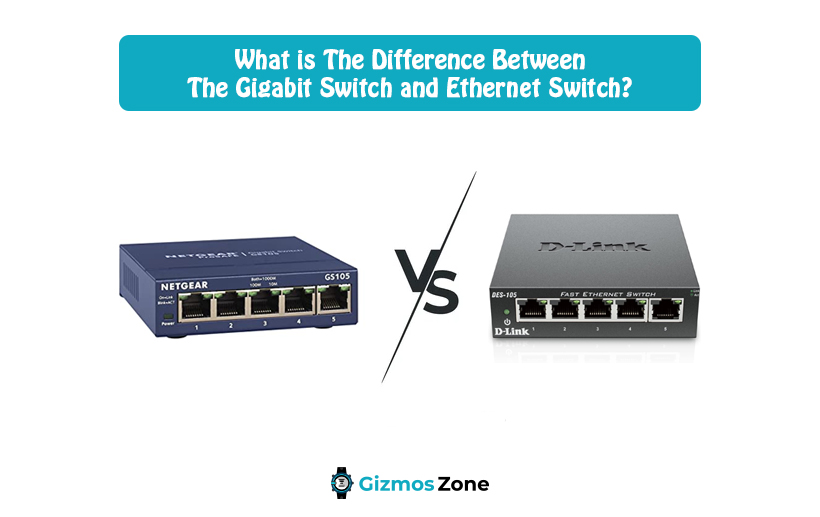 What is The Difference Between the Gigabit Switch and Ethernet Switch?

In simple terms, a network switch is a communication device that is used to distribute or share files among every device connected to a network over cable connections. Not every network switch is equally efficient. There are various types of switches available other than Ethernet and Gigabit network switches and every type can be judged on one primary factor: speed of transmission. Ethernet and Gigabit switches can be considered to be the oldest type that is still in use. Both have played significant and relevant roles in the networking field. So, in what ways are these two different? In this article, we will take a close look at each one of them and help the readers choose the best between the two switches.

Firstly, the Gigabit switches are ten times faster than the original Ethernet ones. They have been designed specially to cater to the high internet needs of today’s youth. Typically, Gigabit Ethernet switches operate at 1 Gigabit per second. It is compatible with the 10/ 100 protocol and developed using RJ 45 ports and SFP slots. The Gigabit switches work well using Cat6 or cat5 copper cables as well as SFP optical devices which function on corresponding patch cable types. To uplink a higher speed and better internet connection, some Gigabit switches even have 10G SFP+ ports.

The Gigabit switch is more efficient than the Ethernet ones because it’s developed using the updated network management system, keeping in mind the latest network management attributes. Not only is a Gigabit switch more preferable than an Ethernet one because of its updated features, but also because it allows people to assign QoS to particular applications. Besides, it also enhances the network’s security. These features altogether have guaranteed the best service level along with improved security. The biggest disadvantage in the case of an Ethernet switch is that it charges money for providing these pro network management features and security options to its users.

Now we would discuss the usefulness of Gigabit switches. They are helpful in the following ways:

With the increasing number of users on the network, people need faster desktops, more updated applications, and even faster internet service providers. All these create the need for higher performance LAN segment ability and improved response times. Hence, bandwidth improvement beyond Ethernet switches is needed to let users enjoy a smooth network operation. New applications, new users, and high-performance servers that are connected to a centralized network contribute to traffic congestion which reduces the speed of the network. To cater to the increasing needs and demands of users, Gigabit switches are the best options to go for to provide users with the infrastructure that would help them meet their needs of evolving enterprise networks.

With developments and upgrades, companies are manufacturing desktop CPUs that work at a faster speed. With that, the system’s connection interface is emerging to be popular for executing desktop processing platforms. This highly efficient system allows the desktop CPUs to completely utilize the bandwidth of Fast Ethernet switches. Again, server technology and workstations are advancing to allow CPUs to flood several fast Ethernet links with network traffic. If you look closely, you would understand that each of these progress and technology advancements suggests the need for a high-performance Gigabit switches for server, backbone, and desktop connections.

As we already said, the increasing importance and need for LANs in recent times and the growing complexities of desktop processing applications are highlighting the need for high-performance and high-speed connections. The bandwidth provided by a 10 Mbps Ethernet network isn’t adequate to cater to the high-speed internet requirements of new users. Several LAN networks of high speed have been developed to provide increased bandwidth and enhanced client or server responses. The best among the LAN technologies in recent times is the Gigabit Ethernet or 10 Bast T. Given the increasing speed of network required by modern users, the need for higher speed connections is clear.

Ethernet switches are also known as network switches. The primary function of any network switch is to allow users on a network to share documents and files or have sharing services among wireless and wired devices present on a network. Ethernet switches work as the prime point for printers, computers, and every other wired network device signed in to the network, helping each of the components connect.

Now that you know the features of Ethernet switches, let’s move on to the advantages of using these:

Fast Ethernet switches offer the option to monitor diagnostics and manage network performances. Without these features, it would have been extremely difficult to regulate the network. Not only does Ethernet switches allow you to have better control over the network system, but also lets you do other things. Offering small form-factor pluggable monitoring, one can use Ethernet switches to send automatic warnings to one’s email.

Not only are Ethernet switches capable enough to inspect and survey network traffic flow, but it also provides you with options to Optimise and manage it. Using these switches one can get information about the data that’s being transferred from one device to the other connected within the network. With that information, you can form a Group for your devices known as the internet group management protocol. It regulates the Ethernets switch to understand network multicasts and delivered the traffic to the required ports.

Apart from the above-mentioned features, Ethernet switches also provide users with the ability to form and program virtual local area networks, also known as VLANs. Irrespective of their physical location, one can connect multiple VLANs into a single network using fast Ethernet switches. To make managing the network easier, tag VLANs are assigned particular ports and every user of the same VLAN are members of the network.

Fast Ethernet switches are extremely efficient in managing the traffic that flows through a network. It makes communication even easier within the network by allowing the necessary information to be transferred easily. But it does so only when it’s needed. By restricting access to the network to only trusted devices, the Ethernet switches let you prevent unwanted users from encroaching upon and forming unauthorized subnetworks.

Now that you know what an Ethernet switch means, let’s switch over to the Gigabit switch in detail.

Noe that we know how a Gigabit switch is more efficient than an Ethernet one based on their transmission speed, we have provided a further comparative study of both based on other factors. Let’s have a look.

Price: In today’s market, the Gigabit switches cost four times the price of the Ethernet switches. The high price gap is probably the most important factor which determines People’s choices.

Feature sets: As we have already said, the Gigabit switch is developed keeping in mind the latest security needs and the network management features. Care is taken to make sure every feature is incorporated into the system. If you want an Ethernet switch to provide you with similar features and security, you would have to pay for it.

Power standard: The original PoE technology offers 12.94 watts for wireless network points and other IP-enabled devices. This isn’t enough to cater to the power requirements of the newer systems. The updated Gigabit switches support the improved PoE standards that deliver 30 watts of power. Vendors are set to update the Ethernet switches to match up to the completion.

Prospects: Shortly, we can expect new technologies to come up with even better network systems and features. Till then, Gigabit switches would continue to be preferred more over Ethernet ones.

Gigabit Switch vs. Fast Ethernet Switch: How to Choose?

Recently, the cost of the Gigabit switches has dropped. Now commoners can use them too for their businesses. Before proceeding to buy any of the two, you must weigh your preferences and requirements. Certainly, going for the Gigabit switch is advantageous than buying an Ethernet one, but you must know when is a Gigabit switch beneficial and when is it not. If you only aim to upgrade your internet speed to 100 Mbps or more or simply to use the internet to perform basic functions like sending emails, surf the net, type messages, etc., buying a Gigabit switch won’t of much use. On the other hand, if you have to host files on a server or play online games or attend conferences and other online meetings, using the Gigabit switch is likely to benefit you.

We have listed everything you need to know about each of the two network systems. Before choosing anyone, you must know whether you need a network switch at all. Even if you need, what is your purpose of buying a network switch? Once you make your decision, consider four factors: sound level, port numbers, forwarding rate or speed of the switch, and whether you require a PoE technology to aid devices like IP cameras, etc. The rest is your decision.

What is a Gigabit switch?

A gigabit switch is used to connect various devices like consoles, PCs, servers, routers, etc., to a Local Area Network. Gigabit switches are used both at home and office. It helps them to hook more than one device to share an Internet connection.

What are the advantages of using a Gigabit switch?

What is the function of an Ethernet switch?

An Ethernet switch is a network switch that allows users on a network to share files and documents among wired or wireless devices on a single network. These type of switches serve as a prime point for computers, printers, and every wired device that are signed in to the network. It helps each of the devices to connect. However, these switches are slower than gigabit switches.