Can a Network Switch Be Used as a Router? 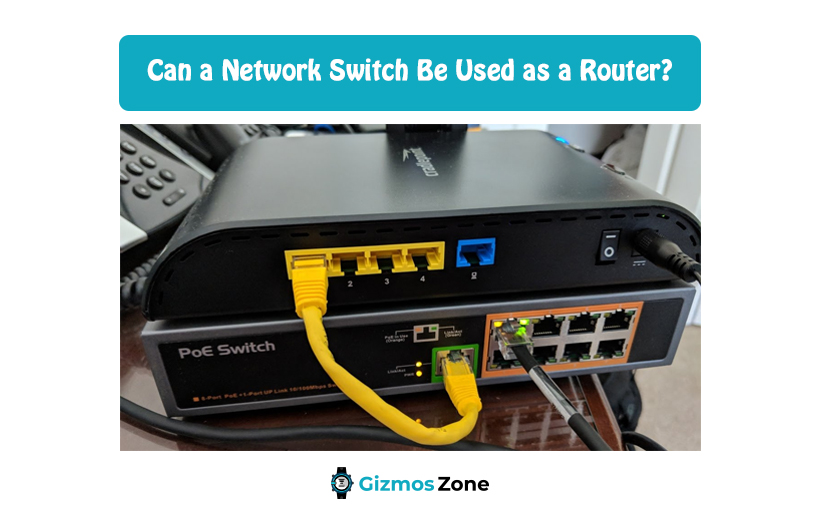 The function of a network switch and router is to provide internet to multiple devices at the same time. But, they are not the same, as they have their peculiar features. You can connect the network switch to the modem through Ethernet just like how you do in a router. Does this mean a network switch can be used as a router? Let’s know!

What is a network switch?

What is a router?

The router is a very popular term when it comes to networking and the internet. It is a device that is used to connect networks. A router forwards data packets to the IP addresses of the networks and manages to traffic the networks. The crucial function of a router is to provide an internet connection to multiple devices at the same time. A router is of many types just like a network switch. The majority of routers forward data packets between LAN and WAN.

To make you understand this in a simpler way, let us tell you an example. A reputed company that has operations in many locations across the country will use individual LANs for each location. All these LANs will connect to form a WAN. WAN requires numerous routers and network switches.

The router’s goal is to guide data packets to reach their destined IP addresses. It will act as an air traffic controller to help data packets efficiently reach the right IP address. Some might think the router and modem are the same. But, they are not. Though the function of both router and modem is to connect networks and to the internet, they are not entirely the same. A router will form a network and manage the data flow between and within the networks, while a modem will connect these networks to the internet.

How is a network switch different from a router?

A Network Switch does not come with a WAN port. This does not mean one of the LAN ports available in the switch could not be used to connect to the modem. You will require a crossover cable for this purpose. Even if you can connect a switch to the modem, you will still require a router. Even when a network switch offers connection to many numbers of devices and the switch is also connected to the modem, it will be able to provide internet to only one device at a time. To provide internet to all the devices at the same time, a router is necessary. A router can provide private separate IP addresses to each device on the network.

Can a network switch be used as a router?

To put it in short, a network switch can be connected to the modem instead of a router, but it is not a good suggestion. We will tell you why. It is all because of your Internet Service Provider. Your ISP will only offer minimum IP addresses. This may be one or two. If you are lucky, it can come down to three, but not more than that. This is called a public IP address.

Once the public IP addresses are exhausted, you can’t connect a new device or access the internet because there won’t be any IP address for that device, as the existing ones are used already. If you have just one IP address, then only one device can access the internet even if you have connected multiple devices to the network switch. Here comes ‘Router’ to the rescue!

A router can help you connect several devices to the internet and also offer them their individual or private IP addresses. When you connect a router to the modem, it will help multiple devices use the internet at the same time, which doesn’t happen in a network switch. A router also plays an important role in providing efficient network security. It has the power to hide your IP address from anything insecure or risky in your network. It has a built-in firewall for this purpose.

So, you can place your trust in the router for the best security. Businesses and enterprises will need a router to protect their confidential data and files in networking. All these useful features of the router cannot dismiss the indispensable aspect of a network switch. A network switch can be used as an additional component to the router instead of replacing the router with the switch.

How to set up the network switch with the router?

Having discussed in detail the concepts related to networking, network switch, and a router and the differences between a switch and a router, we will now see in short how to set up the network switch with a router.

You can now use another Ethernet cable wire to connect the router’s one of the LAN ports to the network switch. After doing all these, you can plug in the power supplies of the cable modem, the network switch, and the wireless router, which you first unplug. The setup is successfully done now. Your network is now extended. Connect over 4 devices now using the internet and connect additional devices to the network switch’s normal port through straight cables.

Which is better: A network switch or Router?

You can have a router along with a modem connection and necessarily have a network switch. The right question would be if you need a network switch? The answer for this depends upon your networking needs. You can own network switches if you have several devices that you need to connect to the network using an Ethernet.