What does a CPU do for Gaming? 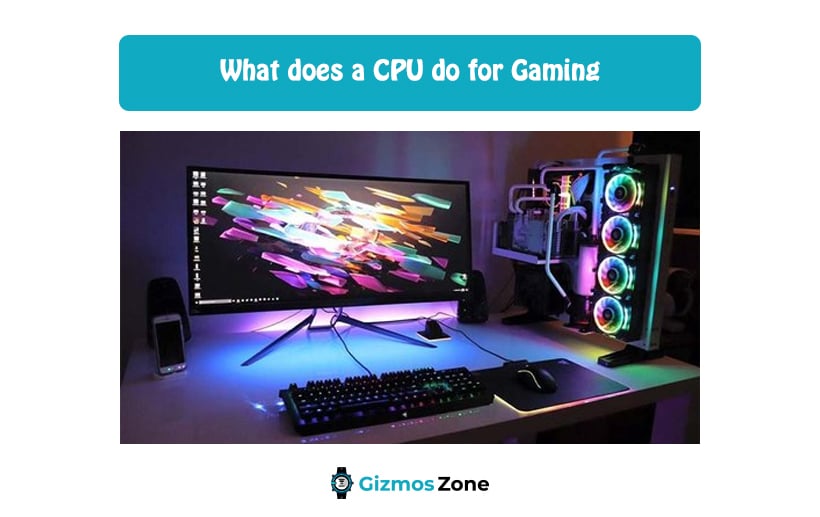 Gaming isn’t just a stress-buster; it is an emotion. After a long day, PC gaming is a really fun way to de-stress and connect with your friends. Gaming is becoming globally recognized as a sport, and this indulgence requires just as much investment as any other endeavor. The world of PC games takes the gamers to a whole new realm, and to experience the best of both worlds, good gaming gear is integral.

Efficacious, high-quality gaming accessories matter as PC games require miraculously quick reflexes as well as a knack for accuracy. Irrespective of the game you are playing, all sorts of games need something to support human reflexes and natural motor coordination. Accessories like headsets, monitors, controllers, and the best network card for gaming can be like your sidekick.

Excellence in their game of interest is everyone’s dream, and using these below-listed top gaming accessories; you can score higher than anyone else. Among all the equipment, the CPU is one of the most vital elements that are critical for the efficiency of a gaming PC. Are you wondering about what goes inside a CPU? Then here is how a CPU works during gaming.

How does a CPU work?

RAM is just the storage that has a game’s memory assets. However, just memory isn’t enough to play a game. That’s when the CPU comes into play. It is responsible for processing input from the player and processing the game’s instructions accordingly. The CPU does things like handling the simulations, environments, and NPCs. As the hardware has such significant value in gaming, therefore games that require a heavier focus on physical simulations use a more powerful CPU.

The CPU is also responsible for passing the information to the GPU. It happens in two stages. Firstly, the graphic assets like textures and models are loaded into the VRAM. As a GPU is unable to access a PC’s memory directly, it has to have its own memory for storing the asset it needs. So, the open-world games with more assets need more VRAM ad higher resolution textures to need more VRAM.

CPU tells the GPU what it has to do. As the GPU is responsible for rendering what users see on screen, the CPU describes to the GPU in different objects on the screen. It seems more complex than what you see, but in a nutshell, the GPU takes the information provided by the CPU and then converts it to an image.

How is a CPU responsible for your gaming performance?

To get immersive gameplay and test the developer’s true intentions for the game, gamers play their games in maximum settings. However, one cannot just turn on settings like cloth simulation, each of your settings depends on the quality of the hardware. But a CPU is like the father of all gaming hardware that you own. It manages a multitude of elements that make the gameplay more realistic and world-building more comprehensive.

CPU is usually used for more intricate instruction sets. It can draw calls to the drivers via graphical API, AI behavior, Netcode for online games, scripting events, as well as to object manipulation, including physical algorithms. It can handle the manipulation of audio, data being transferred to/from the DRAM, storage drive, graphic cards, etc. The immediate instructions are stored on the L1 cache, the next in the L2 cache, and the overflow stays in the L3 cache. CPU handles game logic and calculates how much damage is dealt, how much you are scoring, what happens when you walk into a certain environment orientation, etc. In short, it coordinates with the Basic Input/output system to process and compute commands like the mouse clicks and the key presses.

Specialized hardware can make gaming more immersive and enjoyable, and a CPU that provides response time within a fraction of seconds is one of the must-haves. It can make gaming more convenient with less lag time and give you a real-time experience. You can enhance the performance of your gaming program when the hardware corporates with you, and especially with an efficient CPU, gaming becomes smooth. You can cut costs on other equipment, but having a CPU with high performance is highly essential.

The role of RAM

While upgrading your gaming PC, there are several components to consider, but the RAM in the CPU is one of the most critical aspects. RAM stores the data that the PC needs to access temporarily, and it is the volatile, short-term storage that your CPU needs for seamless performance. RAM is vital in your gaming system as it can access data more swiftly than it can retrieve data from your main storage disk. Users have their entire game’s info stored on their hard drive, but constantly moving it from there isn’t convenient. Thus, your PC moves the needed game info to RAM to quickly load the game.

When your PC has low RAM, your game won’t run properly, which will gradually lead to poor performance, choppy frame rates or even the game won’t start at all. That is why it is important to have dedicated video cards with their own RAM or vRAM, the best DDR3 RAM 8GB, or 32 GB of system ram. Thus, when you play games at high resolutions like 4K, your game won’t lag or leave you waiting for responsive gameplay.

The word core is often used with CPUs. The core acts as the processor of the PC, and it is capable of doing one job at a time. It doesn’t matter how fast your processor is at a certain time; it can only perform one task. So, if someone wants a more efficient CPU, then the key is to get one with more number of cores.

The strength of the core is of great significance as well, and it is determined by something known as the IPC. A high IPC score is essential because the IPC tracks how much data or info a processor can manage within a given amount of time. Nowadays, most games use 1-2 cores, so gamers should get a CPU that features more or the same number of cores as listed above.

How much CPU is ideal for gaming?

The processor, which is also called the CPU, is very important for gaming. Most entry-level processors come with two or four cores. While mid-range CPUs has four to six cores, high-end CPUs can have six to eight cores. For a decent gaming experience, you should opt for a quad-core processor. But if you have a flexible budget, it’s better to opt for a mid-range CPU.

How does CPU affect gaming?

The CPU of your computer plays an important role when it comes to gaming. It updates everything that happens between frames that are drawn by the system’s GPU. In other words, it checks what’s happening in the game, and how it should respond. The CPU evaluates the AI of the game.

What is the work of the CPU in gaming?

The CPU processes the input from the player and handles important things like the environments, NPCs, and simulations. It also transfers information to the GPU in two stages. The CPU prompts the GPU what it has to do. To be more precise, it describes GPU in different objects on the screen. This information is taken by the GPU and then it converts it into an image that you see on the screen.

Whether it is about selecting the right gaming keyboard or a PC tower for gaming, make sure to stay within your budget. Besides, you also need to ensure that the CPU delivers high efficiency along with smooth performance. Gaming enthusiasts all over the world spend thousands on their gaming equipment, especially CPU, because they deliver a more fast-paced, immersive experience.

So, whether you are streaming online or playing solo, get the best CPU and beat your rivals while climbing on the top of the scoreboard.